Objects in the Universe 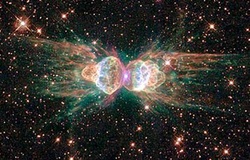 Nebulae are large clouds of gas and interstellar dust. They are the birthplace of stars. 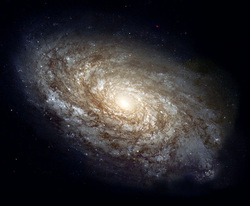 Galaxies are clusters of stars rotating around their centre of gravity 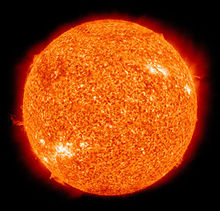 Stars vary in size. Fundamentally they are dense gas clouds where the Hydogen nuclei are fused together in a nuclear fusion reaction. This creates large amounts of energy and electromagnetic radiation. They are ranked by size and brightness. Main-sequence stars are in the middle when it comes to luminosity and size. 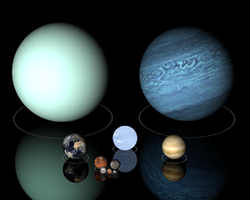 Some planetary bodies in our solar system 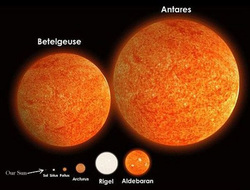 Red Giants are large stars that have little fusion occurring.  They are very bright but do not radiate lots of heat. Less fusion occurs because large stars have exhausted their Hydrogen supply 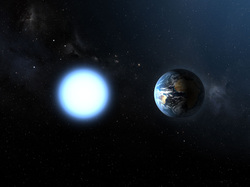 Sirius B in comparison to the Earth

White Dwarf Stars are small dense stars where fusion doesn't occur anymore. White dwarfs are often the centre of planetary nebulas which was formed when the original star's outer layers drifted from the dwarf centre. 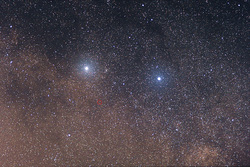 Alpha Centauri A and B are binary stars.

Two stars that orbit around each other. Sometimes a star that is paired with a black hole. The orbits vary from a few thousand miles to several AUs. 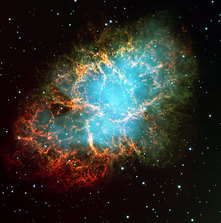 Crab Nebula - Remnant of supernova from 1054

A Supernova is an explosion of a star. This is when the iron core becomes so large that it's gravitational force overcomes the star and forces the protons to bond with electrons creating neutrons. The collapsing matter rebounds off the rigid core creating a huge shockwave. This in turn creates a nebula. 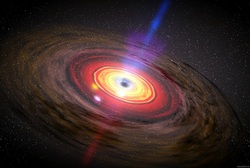 If the star is large enough it will create a black hole instead of a supernova. This is when the core is so large that its gravitational pull is so great that light can't escape its pull. 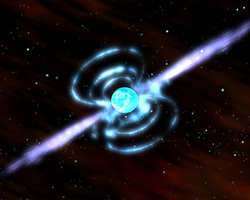 A Neutron star is sometimes left behind after a supernova. They have strong magnetic fields and rotate rapidly releasing pulses of electromagnetic waves giving them their other name - pulsar

A Quasar is a very luminous compact object. They surround a black hole at a galactic centre.

Small Ice and Rock fragments with a gas cloud (tail). Some orbit around stars normally in elliptical orbits.

A Meteor is a rock fragment. When they enter the earth's orbit they heat up. They normally vaporise. Larger ones do collide with the Earth. When a meteor reaches Earth it becomes a meteorite.

Formation of a Star

Death of a Star

In much larger stars than a main-sequence star 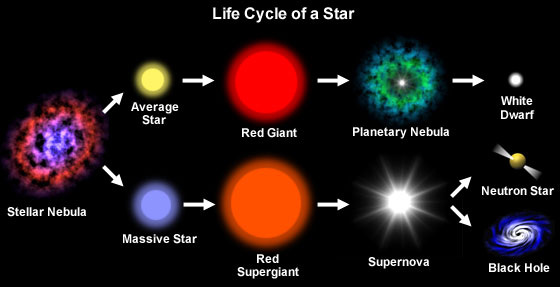 In the 19th century the Universe was thought to be:

Olbers reasoned that if this was true then the night sky should be as bright as the day sky.

Hubble noticed that electromagnetic waves we were receiving from galaxies followed the same spectra our sun gives off but had shifted towards the infrared section of the spectrum. Hubble determined that light waves were experiencing the doppler effect as which showed galaxies were recessing (moving away) from the Earth.

The speed of recession can be determined by the equation:

This helps provide evidence for the big bang as it shows the galaxies are moving from a point of origin as they are all moving away from each other and not being attracted by each others gravitational pull.

Hubble's Constant also helps prove the age of the universe

The cosmological principle states that on a macro scale the universe is uniform and isotropic. Meaning the density is constant throughout the universe and is the same in all directions.

Penzias and Wilson were recording radiowaves with a radiowave telescope from different parts of the sky. They constantly got an unwanted 'noise'.

This noise turned out to be microwaves which were constantly there at the same frequency and intensity no matter what direction the telescope was pointing.

Evidence For the Big Bang

Redshift - Shows all galaxies are moving apart so the universe is expanding - must come from a common origin
Background radiation - Microwave remnants from the big bang - throughout universe so must have come from a big bang.

History of the Universe

It can be determined using the equation below. Hubble's constant should be in per seconds

Fate of the Universe

Critical Density determines the fate of the Universe

If the Universe's current Density: