The study of the rate at which a chemical reaction occurs
You can't forget Kinetics from AS. A2 builds upon this
An increase in temperature increases the average kinetic energy of the particles hence increasing the fraction of particles with the activation energy required for a successful collision. This increases the rate of reaction

An increase in concentration and pressure increases the likelihood of a successful collision as particles are closer together. This increases the rate of reaction

An increase in surface area increases the likelihood of a successful collision as there are more particles available to react. This increases the rate of reaction

Lets consider the reaction of
A → B

The steeper the curve the faster the rate

Change in products or reactants = Rate
Change in time
However, the two lines don't have a constant gradient which means a changing rate

In words the rate of reaction can be expressed as

The rate equation's relation to the general equation is:

As you can see the coefficients don't appear in the equation

This means the rate equation must be found through experimentation

'k' stands for the reaction constant. It remains constant for that one reaction but it's units change

When the power is one the reaction is first order

When the power is two the reaction is second order etc.

Working out the reaction constant's unit

This is an example frame 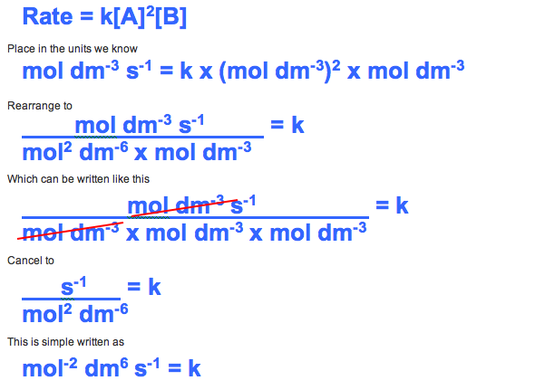 Discovering the orders in a reaction 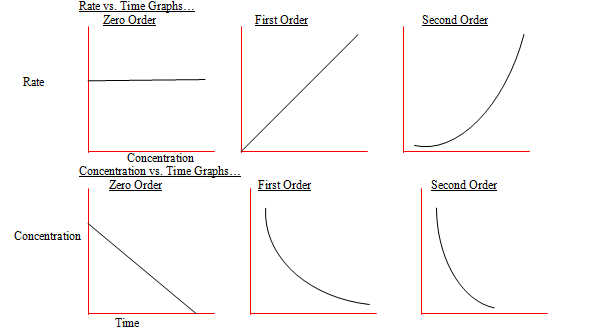 In every process there is always a point in the process which determines how fast the end result is reached.

When making a cup of coffee the rate determining step is the length of time the water takes to boil as this takes the longest of all the processes involved in the making process.

In a chemical reaction you can't time the rate determining step.

Instead you use the intermediate reactions and the rate equation

Using this information it shows that Step 1 is the rate determining step as both chemicals in the rate equation appear in step 1.

This information also tells us that B is a catalyst and C and E are intermediates.
If Step 2 or 3 was the rate determining step then any chemicals from earlier reactions can appear in the rate equation as they too contribute to the time of the reaction.