They are are part of the electromagnetic spectrum which you learnt about at AS
X-rays have many uses and you need to know what they are, how they are produced, how they interact with matter and how they are used

Interaction of X-rays with Matter

The photoelectric effect was introduced in AS Quantum Physics

This is a low energy phenomena collision

This is when an X-ray photon hits an orbital electron from an atom of the absorbing material and is scattered.

Some of the photon’s energy is given to the electron.

This causes the electron to gain enough energy to leave its energy level and travels in a mirrored direction from that of the scattered photon.

The ejected electron may have any energy from 0 up to about 2/3 of the photon energy.

This is a mid energy phenomena

This is a high energy phenomena 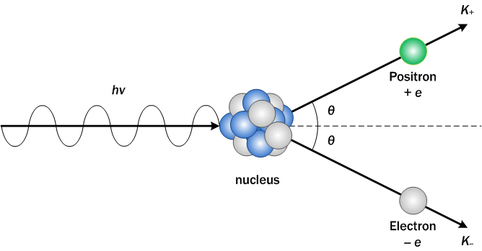 The intensity of X-rays decreases as they travel from a POINT. They follow the inverse square law

However, a collimated x-ray doesn't decrease in intensity. Collimated means all the waves travel parallel to each other

The only way to decrease a collimated x-ray's intensity is to pass it through a medium - this can be air, honey etc.

Attenuation occurs when an x-ray passes through a medium

When one x-ray photon hits the phosphur plate many visible light photons are produced. This means the intensity of the x-rays can be less

Used to view most of the major organs

In a Hydrogen atom the nucleus spins creating a magnetic field with a north and south.

This means if the human body (10% Hydrogen) is subjected to a large magnetic field the Hydrogen molecules arrange themselves parallel to the axis of magnetism.

When a light wave of the Larmor frequency is put through the patient the Hydrogen atoms turn to the anti-parallel.

When the frequency is turned off, the hydrogen atoms turn back to the parallel position but because it is a lower energy state it must release energy. It does this by releasing Larmor frequency photons, which are detected and used to interpret tissue.

Water cells take 2s and brain tissue 0.2s with cancer cells in the middle. The time it takes the hydrogen atoms to return to the parallel state is called the Relaxation Time

When an ultrasound transducer is held near a main artery the iron in the blood reflects the ultrasound waves.

Ultrasound is a sound wave with a frequency above 20 kHz. In medicine it usually has a range of 2 - 10 MHz

This is used in Ultrasound Transducers

When a crystal or ceramic material has a p.d. applied across it, it will expand. If the material contracts a p.d. will be created.

This occurs because when an alternating voltage is put through the transducer it causes the crystal to contract and expand making it vibrate. This creates an ultrasound wave to be given off.

Ultrasound Transducers use the piezoelectric effect to send ultrasound waves into a patient. They than use the echoes coming back.

The echoes received are rebounds off a boundary

This boundary could be between either air and skin, liquid and tissue or tissue and bone

The distance between the boundary and the transducer can be discovered using the simple equation:

However not all the ultrasound reflects off the boundary. Some refracts and this is due to the acoustic impedance (Z) of the new medium.

The acoustic impedance is worked out with the equation

To discover the fraction of the intensity reflected you can use the below equation:

There is a problem in medicine

This would make any results completely useless.

The gel has a similar Z value to flesh, this means that very little ultrasound is reflected before entering the patient giving useful results.

The above techniques are non-invasive (don't require surgery). These are important so patients are at lower risk from side effects or trauma whilst lowering costs of expensive and difficult surgery. They also speed up diagnostics.