It is made of two metal plates separated by an insulator. When a p.d. is put through the capacitor electrons gather on the negative plate whilst the same amount of electrons are removed from the opposite plate

Capacitors only let charge travel in one direction through them.

Capacitance - The ability of a body to store charge (in Farads).

Farad - One unit charge per one unit potential difference

Capacitors in a Circuit

In a parallel circuit, because there is the same p.d. and same charge through each capacitor, the total capacitance is the sum of the capacitors

In a series circuit, because the p.d. is different and there is the same charge through each capacitor, the total capacitance is the sum of the inverse values of the capacitors.

These are the opposite equations to the Resistor equations from AS

Energy of a Capacitor

The area of a Charge to p.d. graph will give he energy of charged capacitor

Discharging of a capacitor

A Capacitor discharges exponentially. This means the ratio remains constant between the starting and final current over an time period

The equations for this discharge are shown below. 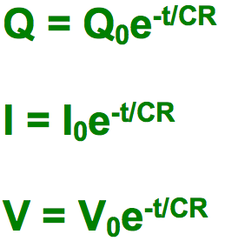 The time constant is the product of the resistor and capacitor in a circuit.

It is measured in seconds

On your calculator you will see a 'ln' and 'e^x' button. These stand for natural log and exponential function.

Visit the Maths pages to understand more about logs and natural logs and how to use them.

Capacitors are used to remove the bump in the current when an a.c. current is put through a d.c. device - which only likes current in one direction