The strength of a base or acid depends on the degree of dissociation (the amount of protons produced).

This means the more an acid dissociates the stronger it is.

Carboxylic Acids (e.g. CH3COOH) slightly dissociate, in water, into carboxylate ions (CH3COO-) and H+ ions. It however is in an equilibrium that lies to the left. Carboxylic acids are considered 'weak' acids and ammonia (NH3) is considered a 'weak' base.

What this shows is that an acid or base can have a range of pHs as it depends on the concentration of H+ ions. This means that

Acid Dissociation Constants are equilibrium constants with a different name

Strong Acids are considered to "fully" dissociate so the moles of acid are the same as the hydroxide ions if in a 1:1 reaction and because volume doesn't change during the reaction the concentration's are considered the same

However in weak acids the same rule can't be applied.

For ethanoic acid the acid dissociation constant would be just like the equilibrium constant:

In this reaction the same number of moles are created each of H+ ions and CH3COO- ions. This means the equation can be written in a more helpful way when working out pH

The Water Dissociation Constant is just another acid dissociation constant.

However because water dissociates so little the [H2O] at equilibrium is considered to be the whole number and so is removed from the equation (Mathematicians just deal with this).

This is used when finding out pH of bases.

pKa is like pH in the sense that it is defined as:

Putting the equations into action

Remember: Don't round any number until you get your final answer

Discovering the pH of a strong acid

Discovering the pH of a strong base

Discovering the pH of a weak acid 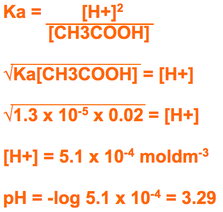 Discovering the pH of a weak base

This isn't done at A2

This is when you add acid to a base (generally an alkali - an aqueous base) until it is neutralised as shown by indicators and vice versa.

The change in pH can be plotted

Here is a reaction with a weak base being added to a strong acid. The equivalence point is the steepest point on the graph. This is where the acid or base is considered to be neutralised.

To know when the equivalence point has been reached we use indicators which at a certain pH change visible characteristics.

The range of the indicator needs to be completely in the equivalence point (where the graph is most vertical).

This is why there isn't a suitable indicator for a reaction between a weak acid and weak base as the equivalence point is virtually non-existent.

In an exam you might given a table with indicators and their ranges.

Strong acid to strong base then go for the indicator with the most obvious change like phenolphlalein.

Some Acids and Bases donate or accept two protons like sulphuric acid. 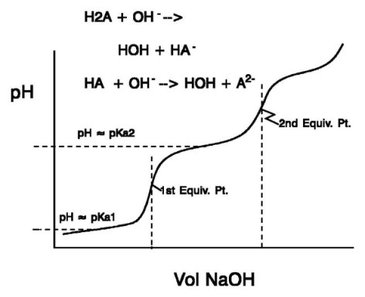 Acidic Buffers are weak acids and one of their salts. They have a pH < 7


This gives you a solution with lots of CH3COOH and CH3COO-

When an acid is added the H+ concentration increases pushing the equilibrium to the left.

Basic Buffers are made from a weak base and it's salt. They have a pH > 7

When an acid is added it is dealt with in two ways.

The H+ ions either:

Why are Buffers Useful?

Buffers are used in many places

Working out the pH of a Buffer Solution

The HCOO- comes from the salt

To find [H+] you need to rearrange

Remember in Buffers [H+] ≠ [A-] so don't use simplified Ka equation

Working out pH of a Buffer Solution During a Titration

Because HA is in excess we need to deduce the amount of NaOH from HA and add to the A- the same amount due to the equation:

We don't need the concentrations to discover the pH though