The field lines are equally spaced and parallel

This gives the equation:
You can work out the electric field strength for a point charge using the equation below.

Charged particle in a field

A charged particle can be fired into the electric field at any angle.

Remember the only force acting is the one towards the plates.

Magnetic fields are areas where charged particles, conductors and magnets can experience a force.

Magnetic flux (The field lines) travel from north to south

This is measured in Teslas and given the symbol B

A wire with a current in a magnetic field will experience a force (creating motion)
These give you the direction of:
Thumb - motion or Thrust (Force)
First finger - Field (Flux Density)
Second Finger - Current
This follows the equation: 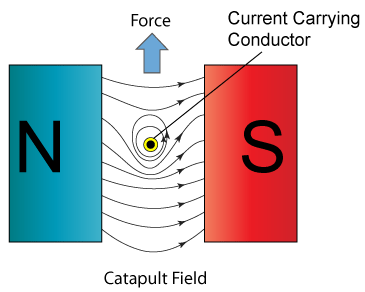 The force experienced is due to two magnetic fields interfering.

The same thing happens to a charged particle (positive or negative) in a magnetic field. It follows a similar equation but with a few tweeks:

The force always acts perpendicular to direction of motion

The particles will always travel in a circular path

Therefore you get the following equation:

A Mass spectrometer determines the abundance of isotopes of an element.

First the atoms are ionised.

They then get accelerated through two electric plates in a magnetic field.

They then enter a large magnetic field and are turned towards a detector.

Ions are accelerated through a potential difference. Those with larger mass have a lower velocity and vice versa.

This means the isotopes can be separated in the next processes.

When a particle enters an electric field it is pulled towards one of the plate. When a magnetic field is put over the top it too exerts a force on the particle. In a mass spectrometer they work together so only ions with the a certain velocity get through (separating the differently massed ions).

For an ion to pass through undeterred then the forces from the electric and magnetic field need to balance.

As shown in Magnetic fields and charged particles, if the particle has a lower velocity (lower mass) then it will be bent less. This is all to separate the isotopes more.

we have from the second field

and from the first field

This gives us the equation 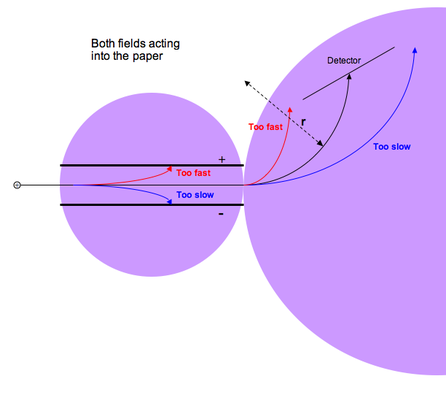 Magnetic Flux is the the field lines flowing between north and south.

It is measured in Weber's (Wb)

The magnetic flux can be discovered with the equation:


When n is the number of turns in the coil

If a conductor moves through a magnetic field then an e.m.f will be produced producing a current itself

This follows Fleming's Right-hand Rule. Same as Fleming's Left hand rule but on the right hand instead 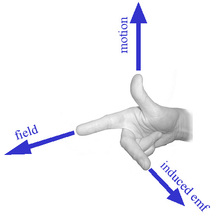 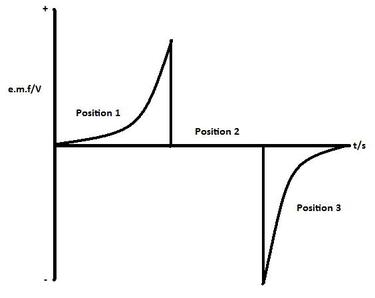 When a coil rotates in a field then an e.m.f is produces an a.c. current 90 degrees out of sync with the e.m.f. You may need to know this graph.
The alternating magnetic flux induces an e.m.f in the other coil.

A step-down transformer has fewer coils on the secondary coil and so induces a smaller voltage.